Back to features
Kgomotso Neto Photography The Taxi Project

In South Africa, particularly in its metropolitan centres, minibus taxis have become the de-facto method of public transport, although they are privately owned. 60% of South Africans use them, which equates to 15 million commuters per day. During Apartheid, they became a means for entrepreneurial black men to earn a living, independent of the repressive mechanics of the state. Over the years these taxis have acquired a poor public reputation due to frequent reports of reckless driving and violent clashes between rival taxi organisations, yet they remain the lifeblood for the majority of South Africa’s commuting working-class population. The stations and taxi ranks from which commuters are picked up vary from informal street corners and open spaces to vast chaotic transport hubs. From sunrise till sundown commuters will queue up to board the taxis as they make their way into the various business districts of the city of Johannesburg. 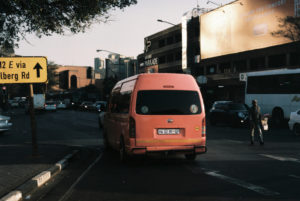 The spaces in which people are transported between home and work come to represent how society views its labour force. A neglected public service speaks to broader neglect of the urban working population – most critically their safety and wellbeing as they make their daily commute. These in-betweens and thoroughfares are the liminal and often vulnerable locations in which people flow to and from employment. They often speak of colonial pasts (European monuments to Empire and military victories), faded industrial cities and wealthy economies. For this reason, these taxi ranks do not merely operate as waiting rooms or thoroughfares but provide a space in which commuters see their cities’ histories and possible futures. The inspiration for this public art project was found in another city space miles from Joburg. Njideka Akunyili Crosby’s work ‘Remain Thriving’ was commissioned for display above Brixton Underground station – a colossal mural that commuters cannot fail to miss as they undertake their daily commute across the city of London. This artwork provided a moving view of black cultural experience, often unspoken and under-represented in visual culture in and around London despite its histories of migration. It had particular significance in this area, which has been rapidly gentrified and is now failing its former inhabitants, largely people of African and Caribbean descent. 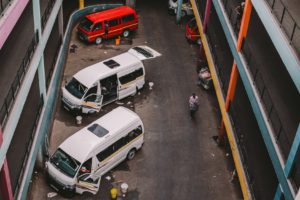 Art has always had a prominent role in South African cultural life, with much of its troubled past and present documented and understood through many famous and anonymous painters, photographers, sculptors, poets and writers. While these storytellers and cultural observers can be found in all neighbourhoods, regardless of race or wealth, for the most part, the art is only shown in certain reified and, by nature of their locations, exclusive spaces. For this reason, it is of utmost importance to create new and dynamic opportunities for a hitherto excluded public to engage with art. This is particularly critical in creating nuanced understandings in a world that appears increasingly dogmatic. 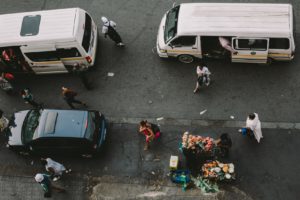 South Africa’s taxi ranks are bustling and energetic spaces, yet the walls are often bare except for advertisements. Very little changes in these spaces and they can become locations one passes through, rather than experience in any meaningful way. This absence of meaningful visual culture in public spaces offers up an opportunity to use the blank walls to create exhibitions of art, particularly art that reflects the experiences of those who interact with the spaces. Starting with Metro Mall (Bree Street) taxi rank, we propose a project by which large scale artworks will be installed where they will be visible to commuters for a limited time. 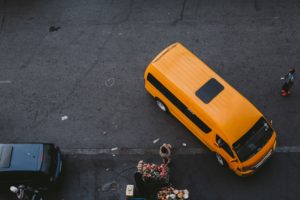 Art and its presence in public spaces have the capacity to promote the values of inclusivity and representation when taken to atypical spaces. A project of this scale serves to provide new understandings without interfering with the practical needs of the station. It functions because South Africans are people who long to see a narrative that reflects both their realities and their aspirations.