Back to features
Nombuso Dowelani Surrealism

“I enjoy being me, art allows me to express myself and live my truth, as a visual artist, I am forced to be in my bubble and to be in touch with my emotions.” 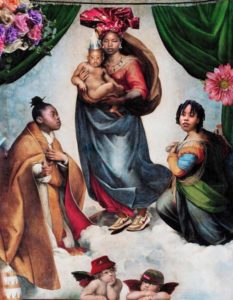 uNombuso is a 20-year-old visual artist from KZN, Newcastle, with a journalistic eye. Her depictions of women are reminiscent of her childhood; being raised in a women-led household with her grandmother uMaZikode and her aunts. Contrary to what most artists experience, Nombuso wanted to become a lawyer, but her grandmother and aunt encouraged her to study something that she enjoyed doing, seeing her talent before she did. The affirmations from the elder women in her life breathed life into her visual art.

She uses research as her basis for her creations and depicts the intricacies of black womanhood and sexuality unapologetically.  South Africa is often referred to as a conservative country; the irony of this depiction is that gender-based violence is still a shocking reality that plagues the countries communities.

“I am a womanist I admire women I believe and respect the abilities and talents of women and I acknowledge women’s contribution to society, in most if not all my work I always depict women, the black female body, and recently I have started depicting women as anthropomorphic figures through a deeper meaning that I am trying to convey.” 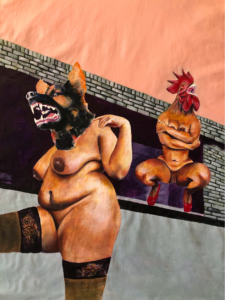 Nombuso shows her admiration towards women through Sexmore a series of paintings she is still yet to complete. Her work is based on Sex workers in Johannesburg CBD, she explains that sex work in South Africa is illegal. She has found that the women she depicts have no legal protection, they are criminalized and stigmatized making them more vulnerable to assault by clients, pimps and brothel keepers. Her overarching concern is that these women work under horrendous conditions, that is bound to break anyone. The artist’s work has directed her to converse with  Sex workers on an intimate level to get a sense of how they feel and how they survive. Through recounting their experiences Nombuso has been given a glimpse of their psychological issues and daily challenges. 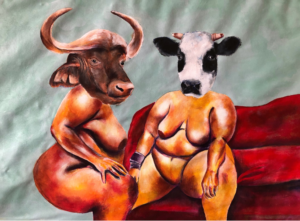 In the Sexmore series Nombuso depicts the sex workers as anthropomorphic figures, the wolf-woman figure is based on the characteristics of a wolf that she has associated with sex workers she sees them as “intelligent, complex caring creatures, with sharp teeth that they use for hunting and protection.” Through the series, she tries to encourage women to be unapologetic about their sexuality and sexual desires.  “Having been raised in a typical black household where sex was something that was never spoken about I still have issues with expressing myself as a sexual being.”

Nombuso’s youthful and daring art calls for more introspection in how the autonomy, psychology and safety of black women are still being handled in the 21st century. Preceding her are notable South African visual artists Helen Sebidi and Mary Sebande who represent the identity of black women in a post-colonial context. Through her work it is evident that the echos of the past still ring in the present, South African black women still hold the sharp edge of the knife.